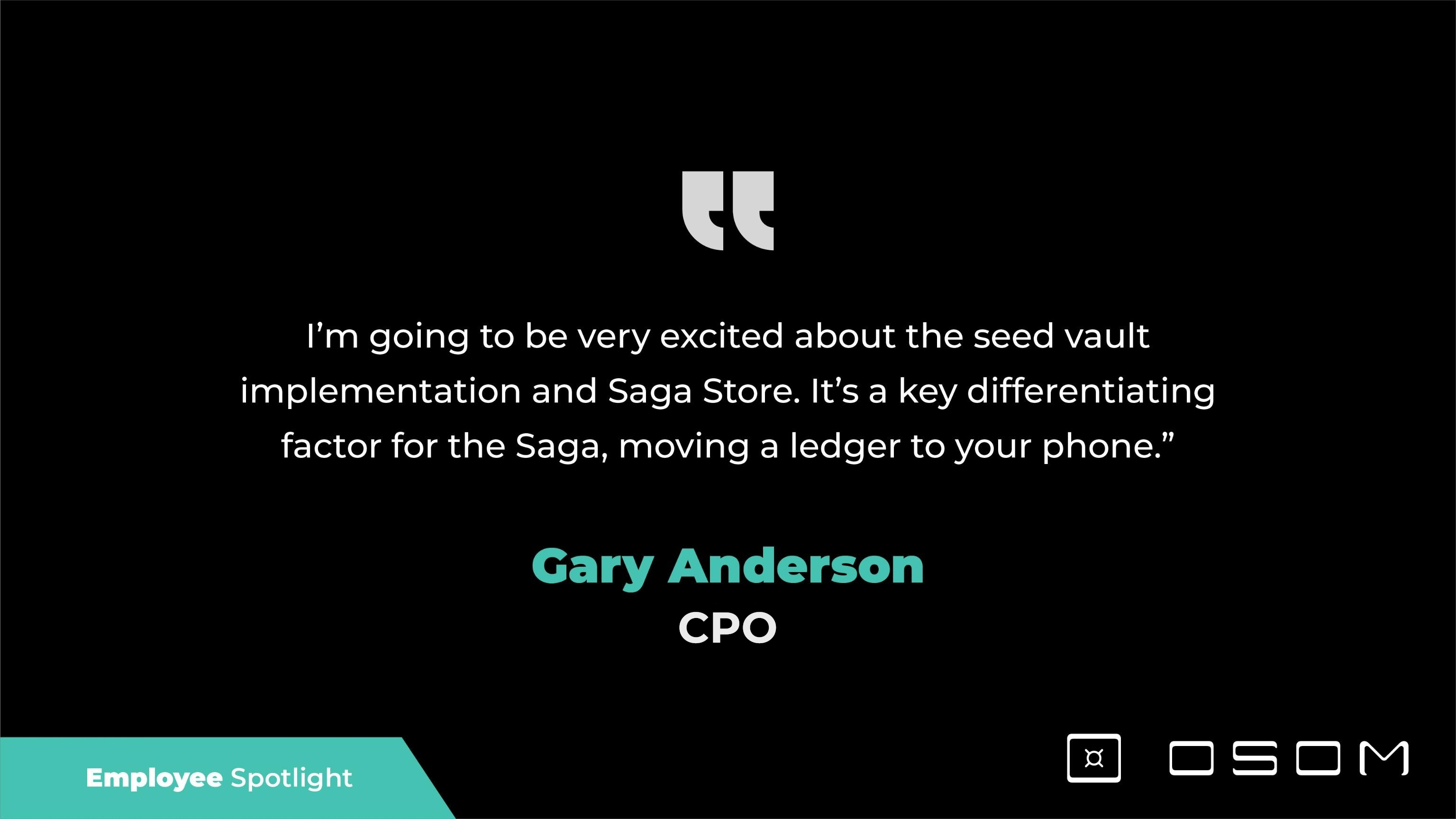 Our team at OSOM is growing quickly, but many of our employees have been here since the beginning — in some cases, long before that. Gary Anderson, OSOM’s Chief Product Officer, was one of the company’s founding employees and worked his way up from handling carrier certification at Essential. From cameras and easter eggs to helming the software development of the Solana Saga, he’s done it all, and here’s a small part of his (and our) story.

You’ve been a part of OSOM from the very beginning, but I’m not sure that everyone knows you were a part of Essential as well. What’s the story? How did you get here?

I’ve held a ton of different engineering roles, and I’ve been working with Android since 2013, with in-flight entertainment systems first. Android had a really strong identity, and I always liked it and identified with it. Then I worked at Samsung’s original incubator program on a launcher feature: a sort of Google Now-like board that got “frankensteined” and ended up being part of Bixby. (I apologize to everyone out there.) But I worked on IoT, Wearables, and a TV-mobile handshaking device, and I learned a ton.

I joined Essential back in 2017. The Softbank news was about to be announced, a 330 million dollar investment that turned Essential into a “unicorn.” I was employee number 37 or 38. And as soon as I joined, I walked into a shistorm — a lot of things were on fire, and we were getting ready for a launch that (little did we all know) was only six months away!

Essential put me on carrier compliance, working with Sprint as an outward-facing engineer. There were a lot of ex-Google employees, and my first boss came from the Pixel Camera; he worked on the Pixel 4’s 3D image scanning. Basically, I was doing a lot of stuff I wasn’t initially brought on for. My primary job was to work on front-end engineering.

We were taking big swings at what a new category would have been — a more “Marie Kondo” style device.

The big thing that I got pulled into was making our camera more stable, and that was fun. We were building our own camera app from scratch, just for the 360-degree camera experience. We brought it from 95% stable to something like 99.8% stable. And the issues with that last 0.2 percent were due to lower-level libraries and basically out of our hands. Then I was solo-tasked at the last minute to engineer our “Tiny Planet” 360-degree camera feature.

I never studied things like stereographic projection, and there are different ways of doing it, just like a map. But I completely restructured our rendering from vertex and fragment shaders to how it’s previewed and saved. I built it completely in-house, working for maybe two and a half months straight.

There are a lot of stories from Essential, but I was there for three years. (Keats used to bribe us software people with candy!) After the PH-1 launched, I worked on the Home device for an entire three weeks before it got canned — that’s a whole story in itself. The Home device had a lot of potential and a lot going for it. Then the entire company shifted focus to Gem, and I was made a technical lead on that project. We were taking big swings at what a new category would have been — a more “Marie Kondo” style device. We had our own Maps app, our own Spotify client made in Flutter, and a lot of in-house work.

What were your favorite things you accomplished at Essential?

Definitely the Easter eggs and the 360-degree Tiny Planet — I made the 3D images not give you a cone head!

I actually had the Easter eggs on the PH-1 in mind since I joined. I started creating these Androidify-type bugdroid characters for everyone at the company, and I was a little worried it might offend some people (I actually asked a few to make their own). It got lost and didn’t make it into the Android 10 release, but you can look it up on YouTube!

We’re planning Easter eggs here for the Solana Saga, we’ve got ideas and we’re going to have a vote on them in the next few weeks.

Essentially, yeah. We’re a small team, so they can’t be too much work to build. Of course, there’s “street credit,” and it’s something that can be a primary feature. We started an Easter egg for Project Gem, a walkie-talkie, and after others got wind of it, they decided to make it a feature! Easter eggs can really personify a company.

So how did you end up at OSOM?

After Essential had wound down — this was prime pandemic, March of 2020, and on top of that, I just found out I was expecting a baby — Keats reached out to the CTO and said he was thinking about doing this. She came back with three names, and one was me. He reached out and said, “Hey, I have a crazy idea. I want to start a company.”

Who starts a company in a pandemic, with all that uncertainty?

Who starts a company in a pandemic, with all that uncertainty? But I liked who was joining, I liked the potential, I liked Keats — he’s a wildcard, especially as a CEO. Very outspoken. The more I thought about it, I thought, “this could be really cool. Let’s start this company.”

I’d worked for small companies in the past. Straight out of college, I worked for a startup making Phase 1 drug discovery equipment, as scrappy as you can get. I did everything: Firmware, PCB board layout, CAD enclosures. Would it be that sort of experience again? I didn’t know. But it would be interesting, and a company that was remote by design was appealing.

Moving into a Chief Product Officer role was more organic. I’ve always been empathetic with development, in tune with being outward-facing and getting along with people. I’ve always been product-oriented, too — being disruptive with what a device can do. I spent quite a bit of time early on experimenting with what the crypto space had to offer, like “play to earn” games. Saw a ton of issues with that whole experience, but I saw the benefits of it and the reasons behind why crypto needs to exist.

There’s a lot of it that didn’t make any sense then, and there are always good and bad things in any new category of technology. There were a ton of engineering problems, but I saw a big potential there for being an early mover in the space. I think it’s an exciting thing for our company to try.

Lastly, what are you most excited to work on for the Solana Saga? What is your favorite feature the phone will have?

Initially, I’m going to be very excited about the seed vault implementation and Saga Store. It’s a key differentiating factor for the Saga, moving a ledger to your phone.

For the future, the privacy features that will come along with the Saga over time. We’re building an open-source framework, there will be feature requests, and people will have insight into what goes into the phone.