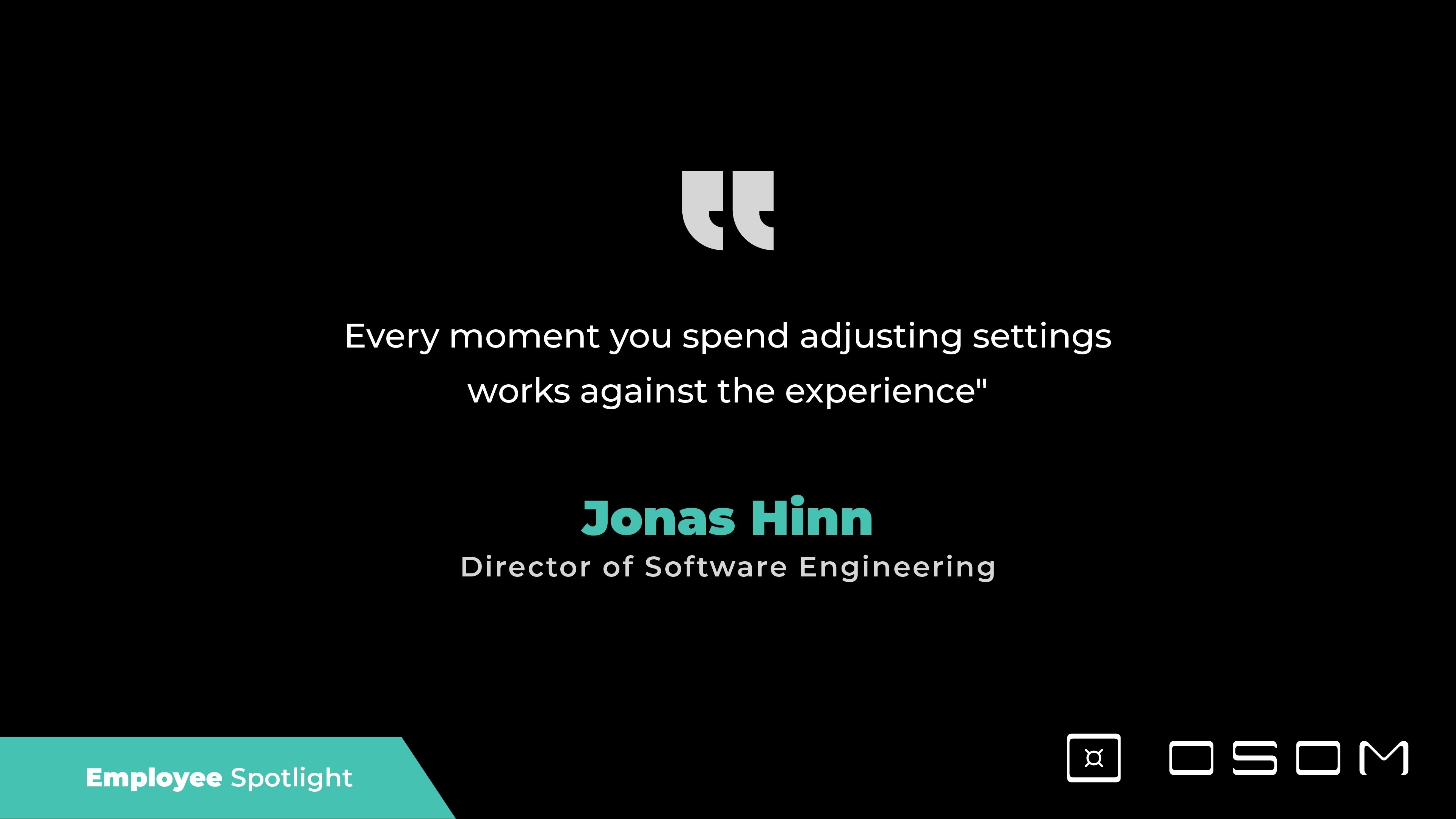 Smartphones are a mature product category. Sure, there are some more adventurous types out there, like folding or dual-display devices, but the “format” of a phone is well established from the familiar shape to the chipset and display technology. One of the biggest ways that companies differentiate their products now is in software, and OSOM’s Jonas Hinn (pronounced “yo-ness”) directs those efforts when it comes to the Saga.

As we gear up for launch, Jonas was able to spare a few minutes for me to talk about the Saga’s Android skin, our light-touch changes to the vanilla base, his opinion on Android wearables, and the impact our Seed Vault solution will have.

You’re our Director of Software, Jonas. I know, the usual startup story applies — everyone here does a whole bunch of different things. But can you tell our readers what you have a hand in at OSOM?

It’s multifaceted. On the one hand, we make modifications to Android’s open-source software. We make changes to integrate our own important features, like the self-custody solution we are building. We also make adjustments to differentiate our brand. On the other hand, we “just” build apps. Those apps are mostly supporting the self-custody Seed Vault feature.

So the team I have makes modifications to the Android framework and builds apps on top of it, just like any other app developer. The team that I work with is small, and we’re all Android engineers that know varying levels about the Android framework — not all of us come from an OEM or hardware device background, and some have more experience building apps.

Before diving in on OSOM’s awesome software features, I had a question about OEMs. I know you worked at Yahoo, Samsung, and Uber (among others). Can you tell us about some of the projects you worked on?

Yahoo was a long way back, and that was web stuff. Since then, I’ve focused on Android, starting with the gig at Samsung. I came there through an accelerator program — a startup in an incubator sponsored by Samsung. We were trying to do a kind of smart home hardware device to improve the interaction between your phone and TV, sending content from one to the other. Typically that involves a lot of connectivity setup, and we wanted to have a device you could use to connect to a TV seamlessly.

This represents what I like to work on the most: Consumer-facing multi-platform products.

That startup didn’t succeed, but the team was hired at Samsung to work on mobile-to-TV integration. At Uber, I was a developer on the rider app core engineering team.

There’s one other interesting thing you worked on, though. You had a hand in Samsung’s Tizen-based wearables! Other people might have other opinions, but I know from my time in tech journalism that when you were working on those, they were considered by some to be the only “good” wearables available for Android.

I am personally excited by Android-integrated wearables. When I worked on that, Android-powered wearables were just okay for a minimally viable experience. The problem at the time was power drain and that you needed a powerful device for Android Wear to work well. Companies just didn’t want to develop for the platform.

A while back, I experienced how engineers went out of their way to make an Android wearable app, but adoption of Wear devices among users was too low to make an impact on the business. It takes a lot for an ecosystem to take off, and I hope that happens in the future for Wear.

Back to OSOM — and I think I already know the answer to this, but — what features on the Saga are you most proud to have worked on?

We built a self-custody solution that lets you have a crypto wallet managed on the phone, and the security for that is provided by the SoC that we use — Qualcomm’s 8475 Snapdragon Platform. The exciting thing is that we created a self-custody solution that has many security features common with hardware wallets yet integrates with existing wallet apps and is, therefore, very easy to use for Saga users. This is something that has not been tapped by the mature hardware device manufacturers [Editor’s note: And it’s patent-pending!].

It’s only through our partnership with Solana that we can build something in this kind of cross-cutting way that works with the Solana stack for dApps that are web-based, integrates with Solana wallets, and can integrate with Android apps, all with an additional layer of security.

It’s exciting to me because it’s new, it solves hard problems, and it has the potential to unlock a lot of innovation from app builders.

Like you mentioned, one of the things you’re in charge of is differentiating our software from Android’s open-source base — adding our custom changes to it. Different companies do that in very different ways, and that’s one of the things that always frustrated me as a smartphone reviewer: A lot of companies are heavy-handed in how they change the OS and make changes in dumb and shortsighted ways. Of course, we are not doing that. What keeps you pushing for a more “vanilla” Android experience?

There are different answers to that question. One that I always keep in mind is our history through Essential when the community was very appreciative of our minimalistic approach to Android. This is a motivation that comes from most Android flagships (particularly the big Android handset manufacturer) having software that is bloated and overloaded with features that users don’t seek out or really want.

Of course, I’m new to OSOM and wasn’t at Essential, but I recognize this and appreciate it. This leads to my second answer: My own needs and tastes in user experience lie in simplicity and ease of use. I like to make changes to the experience to adapt to my preferences, but if I am faced with too many “thrills” or overloaded functionality, it becomes a hurdle to use, dependent on too much system customization to “fix.” I can’t spend an infinite amount of time dialing things in to suit me perfectly.

I want to focus on the apps; apps are what you use on the phone. In the end, you want to take pictures, pay bills, listen to music, watch videos, and do useful stuff without the operating system getting in the way. Android won’t help you accomplish any of that by itself, and it shouldn’t obstruct that. Every moment you spend adjusting settings works against the experience.

You got to talk on stage at Solana’s Breakpoint event last year. What was that like?

[Pause] I got some dry mouth. It takes a lot of nerve to get up and speak to such a large crowd. But it was exciting, and the people there were very welcoming. I don’t know how else to put it, but there was just a good vibe in the room; there were a lot of exciting announcements. Being on stage with and being part of the Solana Mobile experience was really great because they’re trying to do something that no one else is investing in right now.

Lastly, I know there are some other things you and your team are working on.

When I joined OSOM, I had a lot of very constructive conversations around privacy. The whole team is still really motivated to make a difference for customer privacy. We have a lot of ideas and features coming. I know a lot of people probably think they went into the drawer with the Solana partnership, but they didn’t! It’s still the theme for the software team; we are conscious and mindful of privacy matters, and still planning to ship tools for privacy-minded customers. It’s going to be pretty cool, even if I can’t talk about it yet.

They’ll hear about it soon! Thanks for taking a few minutes from the software grind, Jonas.