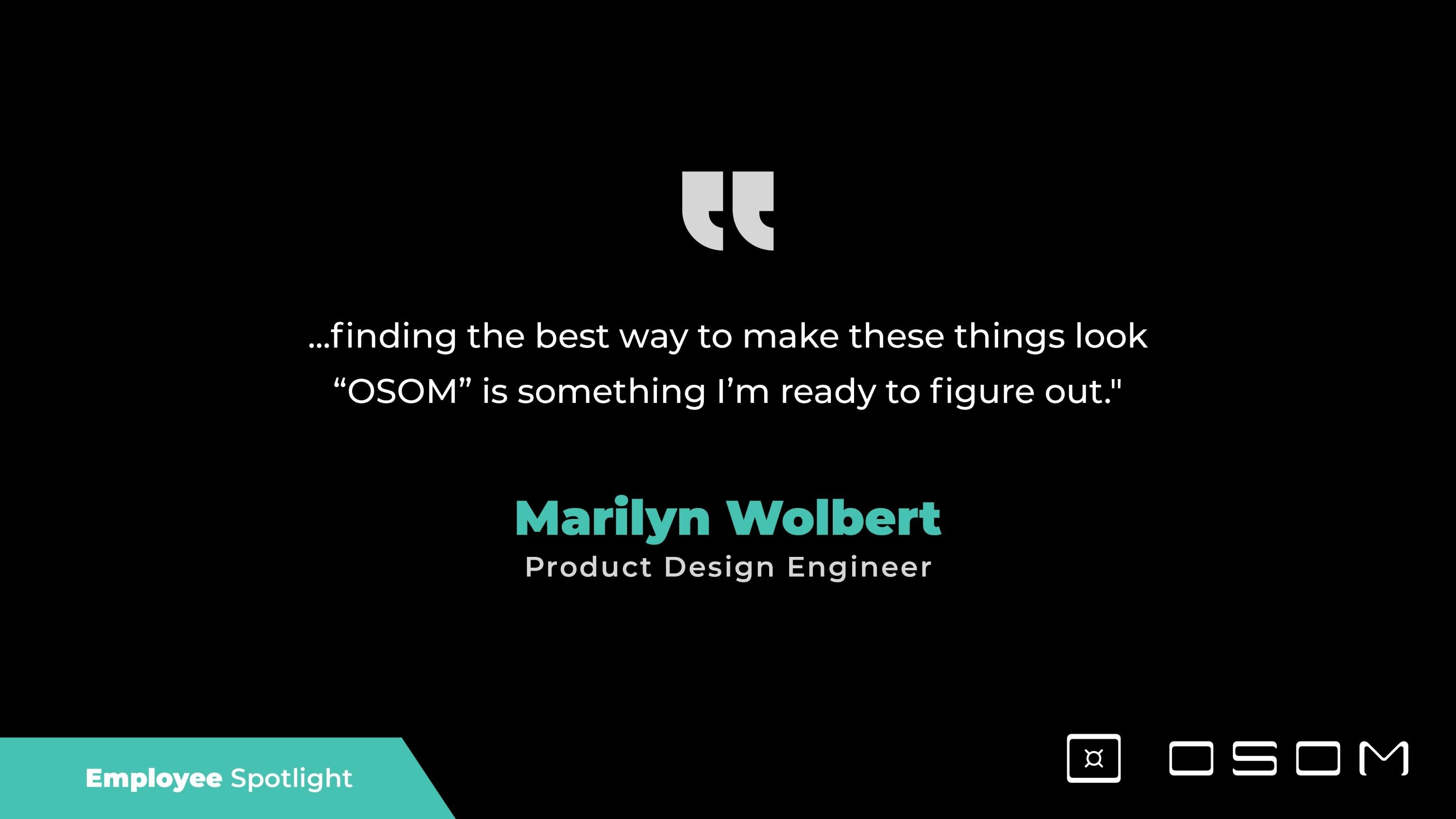 The smaller the company, the bigger an individual’s impact on it can be. Here at OSOM, that means there are a lot of cross-discipline opportunities. Marilyn Wolbert is a product design engineer and one of our newest hires in the design department, and that means she’s responsible for things like how future OSOM products will look. She’s worked at Apple, in aerospace, and at a magazine. And, given both her background and her hopes, she’ll probably do a lot more here than just CAD work.

Thanks for taking the time to talk with me, Marilyn.

So many people on the OSOM team have worked together since the essential days, if not longer. But that’s not the case for you or me. In fact, you’re one of the newest faces at OSOM. Tell me about your background.

Before OSOM, I had quite a few different experiences, mostly in product design. I did PD (product design engineering) at Ball Aerospace, Apple, and a startup called Optel. I was working as a mechanical test engineer at Zipline here in San Francisco recently. I’ve dabbled in process engineering for a bit too… and really hated it. Product design is where I feel I should be.

I’ve also done some non-technical work. I edited for a magazine for quite a long time and ended up as editor-in-chief for a while. That wasn’t engineering, but it was one of my favorite positions and a lot of what I learned has carried over.

I was going to ask you about that. What was it like moving between writing/editing and mechanical engineering?

Before university, I was more on the creative side — a lot of music and a lot of writing. I didn’t get into the whole engineering world until college, and once that happened, the magazine sort of acted as a creative outlet. I found that as soon as I got into engineering, it was hard to focus and make time for anything else. The EIC job was nice to have on the side while I was there and it kind of kept me sane for a while. Laughs.

I had a great time heading the magazine, I tend to enjoy leadership positions and working with really large groups. We had over 100 general staff members and quite a few e-board members that worked under me. So many ideas and passions all in one place, I loved it and saw it more as a creative outlet than a job.

I know exactly what you mean. I don’t know if you can talk about it yet, but what did you work on at Apple? Any specific projects you can discuss?

All my projects are public now. I was on Mac PD and worked specifically on the Mac Mini and the first M1 DTK (Developer Transition Kit). It was very secretive at the time, and they kept me there for a full year until after it launched, so they could release me “safely”.

The DTK was a testbed for developers to get a better understanding of the new M1 chips before it came out in laptops and desktops, so they had more of a background on it, a lot like the DVT release that is happening for the Saga. I was the DRI for the power supply units, so there were a lot of material and electrical changes that I spearheaded.

I was actually pretty lucky – usually at Apple (and particularly in PD), you’re very specialized in one component at a time. A lot of people will work on Mac laptops and only touch the trackpad until the product launches. Since there were only three of us on my team, we got to work together on the entire product and see the whole computer lifecycle, which was incredibly informative.

I know most of the design work for the Saga was done when you came aboard, but there have been some lingering bits to polish up and work on other stuff. What sort of things have you been doing at OSOM since you joined?

I came in right around the time that all the PD work for Saga was almost done. I’ve been mostly working on accessories, products such as cases. I’ll be dabbling in a few other accessory designs for the time being. Once we roll around to new products, I’ll be on the design side for those as well.

So what do you think of the Saga’s design?

It’s interesting! Some very fun specific features and interfaces make it difficult to CAD around, but that also makes the phone’s design very unique. It’s a lot different than an iPhone, obviously. It’s very different from what I’ve worked on before, and it’s a cool design. I’m interested in how we’ll work off it for future iterations.

One of the things I think is really cool, one of our biggest differentiators, is the use of materials.  Stainless steel, ceramic, titanium. You don’t see that often or at all in smartphones. What sort of challenges does that impose on your work?

It’s definitely a learning curve when it comes to material properties. I’ve worked mostly with aluminums and plastics. Luckily, I’m working on cases that are mostly injection molded right now, so I’m in a pretty familiar place. I'm curious about what I’ll have to learn later as far as using stainless steel and these other ‘exotic’ materials in a phone.

What’s your favorite thing you’ve worked on at OSOM so far?

I guess I have a favorite phone case design, and I’m excited about some of the work that’s coming. There are some discussions on other accessories, other design projects in the works, so I’ll have a better answer to that question later.

I know all designers keep this sort of stuff in the back of their minds: What is something that you’d love to design that you haven’t had the chance to work on yet?

Working at Apple for a year, there were different levels of PD: Mac PD, interconnect PD, and iPhone PD. And the iPhone PD was very different from the Mac PD I was involved with. I’ve never actually specifically designed a phone, and I’m really interested in learning how it all interfaces together.

I’m looking forward to getting a deeper knowledge base on the product itself and being able to work off of that. We’ve got other products being storyboarded currently, and finding the best way to make these things look “OSOM” is something I’m ready to figure out.

A lot of OSOM’s design language is spiritually inherited from Essential. You can see and feel Dave’s influence at both companies. How would you describe our industrial design?

It’s very Dave-esque. If you’ve seen some of the other things he’s designed, it’s in the same scape. It’s very minimal, and I like that — doing a lot with a little. The phone really encompasses that sort of philosophy. It’s not totally out there, but it’s unique. It’s all very neat and well put together, physically and aesthetically.

I think it’s important to have a defined aesthetic like this, it draws people in and keeps them interested.

I know you are still settling in, but what do you think of OSOM as a place to work?

I’m still getting to know everybody (and I’ll get to know them better at our big meetup). Though it’s obvious whenever a company brings in diverse technical backgrounds as everyone can contribute to the things they know very well vs. making everything sort of “cookie-cutter.” OSOM does a good job of utilizing everyone’s experience. On the PD team, everyone can bring in their ideas; no one is stifled.

I’m also really looking forward to applying my non-engineering skills. It’s the advantage of a small company. I might help you with editing or be able to contribute on camera. I like to do a little bit of everything — do a little PD one day, a little writing another. And you can do that here.

That’s the benefit of a startup. There’s a lot to get done, and you can flex those other muscles and even build some new j skills if you’re open to it. Maybe you’ll have a pass editing the next post!