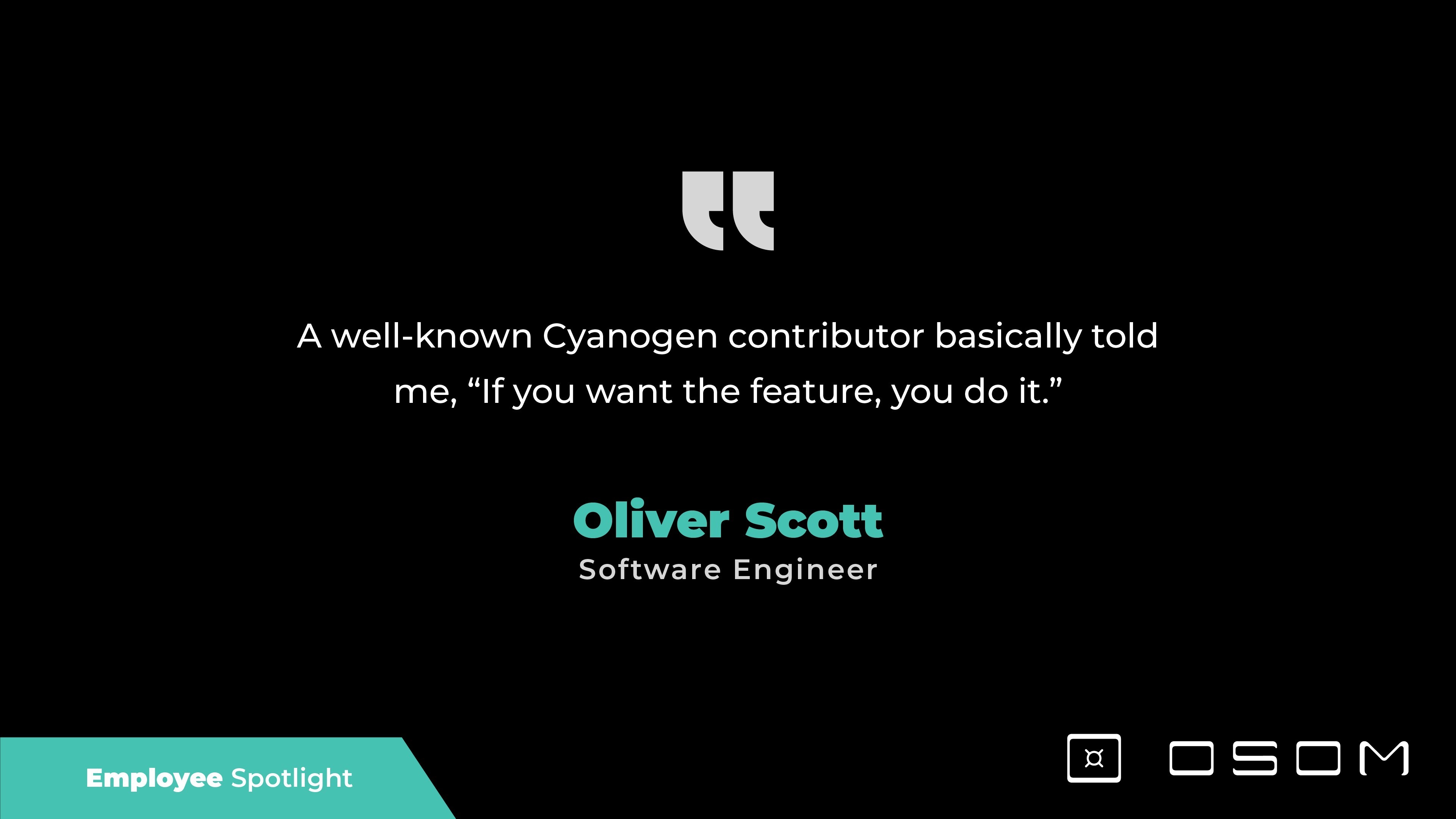 Some of OSOM’s engineers have worked together for much of the last decade, sharing time at Essential and Playground. But many of us (including me) are new faces in the smartphone startup community. In today’s Employee Spotlight, I spoke to Oliver Scott, a Senior Software Engineer with a history of contributing to popular Android ROMs like CalyxOS and LineageOS. He knows the features Android fans like to see because he’s worked to bring them to thousands of other phones in his spare time. And he’s also aware of the struggle independent developers face trying to stretch out hardware lifespans. Oliver plays a big part in the Solana Saga’s software, even if he can’t brag about many of the things he’s done just yet.

Nice to finally sit down and chat with you, Oliver! A lot of the people here have been around since the Essential days, but that’s not the case for you or me. We’ve got a different sort of background. How did you get here? What route did you take to get to a phone company? How did you get into Android?

So, my first time touching Android stuff was when I went to university. In 2015, my father got me a Samsung Galaxy S5 off eBay from the US (it was Sprint-branded, and I’m in Canada). I owned an iPhone briefly before that, and I didn’t really like the ecosystem. I still don’t; I’m not an “Apple person” at all.

When I first turned it on, there was this weird boot screen I didn’t recognize — I knew what to expect from Samsung’s TouchWiz software, and this blue logo wasn’t it. I started looking into it just out of curiosity. I flashed back to the stock software, but the experience got me doing research about what this “CyanogenMod” was. And as I was reading about it, I got more interested. Eventually, I ended up re-flashing CyanogenMod back on the phone.

I was just a “user” at the time. The main thing that I liked about Cyanogen was the Wi-Fi/mobile data toggles for each app. That was something iOS had, but TouchWiz didn’t.

At some point, Cyanogen released a version upgrade to Android Marshmallow / CyanogenMod 13, and the feature was gone! So I went on the support channel in IRC and started asking questions: “Hey, why’s this feature gone?” Like a normal angry user. Laughs. I wasn’t that angry, just curious why it was gone. And they told me the main developer that worked on the feature had disappeared.

A well-known Cyanogen contributor basically told me, “If you want the feature, you do it.” This was my first semester of college. I’d never programmed in my life before, but I was learning Java. And so I took that advice literally and did it. And to this day, I still maintain that feature at LineageOS and CalyxOS.

So you came here from CalyxOS? Can you tell people a little about that project and what you’ve worked on there?

I still work with them, just splitting my time now that I’m at OSOM. It’s a “ROM” or an alternative Android operating system that reuses, bundles, and repackages features to improve privacy. For example, we started exposing a lot of stuff from work profiles to let users have different accounts for certain apps or tie sensitive contacts to specific profiles.

I’ve worked on timeouts for Bluetooth, so if it’s on and there’s no device connected, instead of just leaving it on, draining your battery, while your phone screams, “hey, I’m available — someone, please connect to me!” Instead, there’s a timer with an internal alarm that disables it after a while. There’s some firewall stuff I’ve worked on and maintained as well that touches on some super-secret OSOM features we haven’t announced.

Shush, don’t tease the fans. So what else do you do at OSOM?

A lot of the projects aren’t public yet, and I can’t talk about them. But I’ve worked on Solana’s Seed Vault — some of the code there is mine. Otherwise, privacy features people will like.

What’s it like coming from the ROM community? Is it harder developing from scratch for new hardware compared to just adding some new bits and features on existing devices?

From my perspective, there’s not much of a difference, actually. I’m dealing mostly at the frameworks level (system services and such), which are abstracted enough that they aren’t hardware dependent. It’s basically the same as contributing changes to a ROM. If anything, it might even be a little easier since we’re starting with a clean slate, closer to AOSP, and there aren’t as many pre-existing features to conflict with.

What would you tell other people in the ROM community that want to find new ways to make money with their work (like working here at OSOM)? What things should they work on and consider?

Everyone’s story is different. Even in the ROM community, you work on different things. What I’m about to say might seem obvious to some, but it’s very true: Work on a portfolio. And if you’re involved in an open-source community, you have one already — all that work is literally a portfolio that’s there for anyone to see. It’s got your name and email attached to it (if you aren’t using a throwaway, for some reason). Every place I’ve been hired at has looked at my commits, and interviews have started with people already seeing the work I’ve done.

I recommend platforms like LinkedIn, Github, Gitlab — wherever you have a portfolio, get your links in there. And be willing to apply a lot. In the last eight months of university, I applied like crazy, and I think I got a total of like two interviews, and one of them was government (which is much easier in my experience to get than the private sector). But it’s important to show the work you’ve done and promote it.

One last one: What’s your favorite feature the Solana Saga is going to get?

I’m biased, but I would say the stuff I’m working on — the super secret stuff, the privacy stuff. I come from that background with CalyxOS, with my experience in the Android world really stressing the value of privacy. There are a lot of people that can benefit from even small privacy tweaks, and those are the kinds of things I think are worth investing in.